It is a group of cryptocurrency miners who combine their computational resources over a network in order to increase their probability of finding a block and mining successfully for cryptocurrencies through the use of a mining pool. The purpose of this article is to explain everything you need to know about Crypto Currency Mining Pools.

Cryptocurrency mining pools are groups of miners who share their computational resources with each other to mine cryptocurrency. As a result of these combined resources, mining pools have been able to increase the probability of finding a block or otherwise successfully mining for cryptocurrencies.

It is the responsibility of the participants in a mining pool to share the rewards they receive for their efforts if the mining pool is successful.

How a Mining Pool Works

Individually, each member of a mining pool contributes his or her processing power to the effort to find a block as part of the mining process. Typically, the pool will receive a reward if the efforts are successful, usually in the form of the cryptocurrency that is associated with the pool.

Cryptocurrency miners have the option of going solo with their own dedicated devices, or of joining a mining pool where multiple miners and their devices complement each other’s hashing output. Adding six mining devices each offering 335 megahashes per second (MH/s) can generate a cumulative 2 gigahashes of mining power, resulting in faster hash function processing. 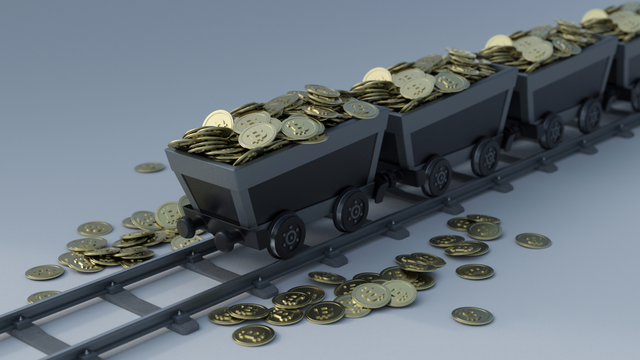 Method 1 – Pay-per-Share – PPS allows miners to earn an instant, guaranteed payout when they contribute to the probability that a block is discovered by the pool.

Method 2 – Proportional – Once the mining round is over, miners earn shares. The value of each share is only calculated at the end of each round, so all shares are equal.

Method 3 – Solo Mining Pool – Solo pools work the same as usual pools except block rewards aren’t distributed to all miners. In a solo pool, the miner who finds the block receives the entire reward.

Method 4 – Pay-per-last-N-shares – It works similarly to Proportional, but instead of calculating the reward based on all shares in the last round, it calculates it based on N last shares. It means that when a block is found, each miner’s reward is calculated based on his or her contribution to the last N pool shares. As a result, if the round is short enough, all miners get more profit.

Method 6 – Peer-to-Peer Mining Pool – Peer-to-peer mining pools (P2Pools) decentralize the responsibility of pool servers, removing the risk of cheating by pool operators and single points of failure. Share chains allow miners to mine at a lower difficulty at a rate of one block every 30 seconds on a side blockchain.

Share blocks are transmitted and merged into the blockchain once they reach the network target. When this occurs, miners receive proportional rewards based on the shares that were submitted before the target block was reached. In order to be a part of a P2Pool, miners would have to run full nodes, bearing the weight of hardware expenses and network bandwidth demands.

The mining tool has many advantages, but it also has some disadvantages, which are listed below.

When individuals join a mining pool, some of their autonomy is sacrificed. Pools usually set their own terms, which may determine how the mining process is conducted

The mining of Bitcoin can be a very profitable activity, especially if you join a pool as the difficulty of mining Bitcoin increases with each coin awarded. Unless you have the resources to manufacture your own miners or buy multiple state-of-the-art ASIC miners, it would be best for you to join a pool if you wish to be competitive.

We have provided all the required information about Crypto Currency mining pools, so its up to you, if you want to join then go ahead, if not wait to set up your own pool.

Thank You For Visiting: CyberLearning