Encryption And Decryption In Cyber Security are the principles of information security. Transforming plain text data (plaintext) into something that appears random and meaningless is the process of encryption (ciphertext). The process of turning ciphertext back to plaintext is known as decryption.

Encryption And Decryption In Cyber Security

A larger amount of data must be encrypted, hence symmetric encryption is utilised. Both the encryption and decryption procedures employ a symmetric key. The key that was used to encrypt the data must be used to decrypt a specific piece of ciphertext.

To make it as difficult as possible to decrypt the generated ciphertext without the key, every encryption and decryption procedure in cyber security has this as its goal. There is no strategy that, when applied to a really excellent encryption scheme, is noticeably superior to carefully attempting every key. The longer the key for such an algorithm, the more challenging it is to decipher a piece of ciphertext without the key.

It’s challenging to evaluate an encryption algorithm’s quality. Sometimes algorithms that appear to be strong turn out to be very weak when the right attack is used. It is advisable to use Encryption And Decryption In Cyber Security that has been in use for a while and has successfully resisted all attacks.

How does Encryption work?

Encryption is a technique for making data messages or files unreadable, ensuring that only a person with the proper authorization can access that data. Data is encrypted using sophisticated algorithms, and the same data is then decrypted using a key that is supplied by the message’s sender.

Information is kept secret and confidential by encryption while it is being stored or sent. Any illegal access will merely reveal a disorganised collection of bytes.

You should be familiar with the following terms related to encryption:

Algorithms, also referred to as ciphers, are the guidelines or directions for the encryption procedure. The efficiency of the encryption depends on the key length, capabilities, and features of the employed encryption system.

Decryption is the process of turning unintelligible ciphertext into understandable data.

A random string of bits called an encryption key is used to encrypt and decrypt data. Longer keys are more difficult to break, and each key is different. Public keys typically have a length of 2048 bits, while private keys often have 128 or 256 bits.

Different types of Keys are available

Digital encryption algorithms operate by mathematically altering the digital content of a plaintext message to create a ciphertext version of the message using an encryption algorithm and a digital key. If only the sender and recipient have access to the key, then communication between them can be done safely.

There are several keys available that facilitate the Encryption And Decryption In Cyber Security process. Let’s examine the keys that are available in more depth.

The keys known as public keys are essentially used to encrypt the communication for the recipient. This cryptography uses two key pairs as the foundation of its encryption system.

Since one key can be used for both encrypting and decrypting data, the private key is frequently used with asymmetric encryption algorithms. Additionally, it could be included in the public/private asymmetric key pair.

A shared secret key, commonly referred to as a PSK, is one that has been previously exchanged via a secure channel between two distinct businesses or individuals before it is utilised. 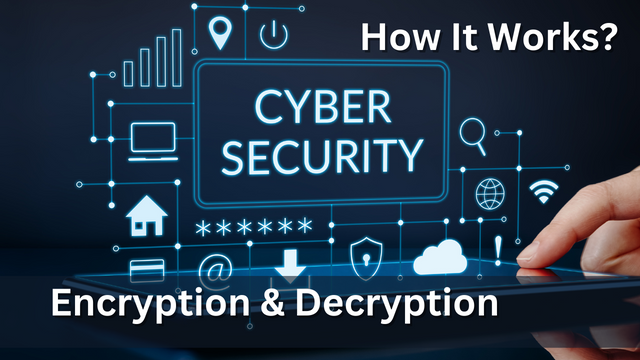 Types of Encryption Strategies in CyberSecurity

Symmetric and asymmetric encryption are the two types of encryption most often used today. Whether or not the same key is used for encryption and decryption is what gives the phrase its name.

In shared key encryption, messages are encrypted and decrypted using the same key. The sender and the recipient of a communication must both possess the same key for shared key cryptography to function, and they must both keep it a secret from everyone else. As seen in the following diagram, the sender encrypts a message using the shared key before sending the ciphertext message to the recipient.

Public key encryption methods allow users to keep their private keys private while making their public keys available to anyone. When a user wants to send a private message to another user, the message is encrypted before it is sent to the receiver. The subsequent figure depicts this procedure.

The following are crucial justifications for utilising encryption, in case someone is unsure of why businesses should do so..

The original Data Encryption Standard (DES) algorithm was intended to be replaced by Triple DES, but hackers soon figured out how to easily break it. At one point, the most popular symmetric algorithm in the market and the recommended standard were both Triple DES.

The three separate keys of Triple DES each have a length of 56 bits. Although the entire key length is 168 bits, experts contend that a key strength of 112 bits is more accurate. Despite being gradually phased down, the Advanced Encryption Standard has largely taken the place of Triple DES (AES).

The U.S. Government and several organisations trust the Advanced Encryption Standard (AES) algorithm as the industry standard. Despite being quite effective in 128-bit form, AES also employs keys of 192 and 256 bits for use in heavy-duty encryption.

With the exception of brute force, which tries to read communications by employing all conceivable permutations of the 128, 192, or 256-bit encryption, AES is generally regarded as resistant to all attacks.

The industry standard for encrypting data exchanged over the internet is the public-key algorithm RSA. It also happens to be a technique employed by PGP and GPG software. Due to the usage of a pair of keys, RSA is regarded as an asymmetric algorithm as opposed to Triple DES. You can encrypt a message with your public key and decrypt it with your private key. RSA encryption produces a massive amount of gibberish that requires a lot of computing power and time for attackers to decipher.

Another algorithm intended to take the place of DES is called blowfish. With this symmetric cypher, each message is encrypted separately after being divided into blocks of 64 bits. Blowfish is renowned for its incredible speed and all-around efficiency.

Vendors, however, have made the most of its unfettered accessibility in the public domain. Blowfish can be found in software areas including e-commerce platforms for protecting payments and password management systems for password protection. One of the more adaptable encryption techniques is this one.

Bruce Schneier, a specialist in computer security, is the creator of Blowfish and its successor Twofish. This algorithm allows for the usage of keys up to 256 bits long, and because it uses a symmetric approach, only one key is required. One of the swiftest of its kind, Twofish is excellent for usage in both hardware and software contexts. Twofish is also freely accessible to anyone who wants to utilise it, like Blowfish.

The Future of Cryptography

Security experts must continually come up with new plans and techniques to fend off cyberattacks since they are constantly changing. Even the National Institute of Standards and Technology (NIST) is examining how quantum cryptography will affect the development of encryption in the future. Watch this space for fresh information.

Encryption And Decryption In Cyber Security should be a part of your arsenal of security measures, whether you’re securing your email communications or your data storage.

As most of us work online, where an attacker can easily access your data, it is very useful over the internet. To prevent this, we use Encryption And Decryption In Cyber Security technique.