Many people believe you need a huge, expensive setup to mine Bitcoin at home, but that’s not entirely true. You are unlikely to make any money mining bitcoin as an at-home miner, but you could still get rewarded with 6.25 BTC if you find a block. The purpose of this guide is to explain how to mine bitcoin at home, so stay tuned.

Over the past few years, bitcoin mining has undergone many changes. A rise in competition and thus computational power has led to a decline in profitability for at-home mining. At the same time, altcoin mining and mining pools are re-opening the door to Bitcoin mining from home. We will share the entire process below for “How to Mine Bitcoin at Home”.

How to Mine Cryptocurrency on Android

What is Bitcoin Mining?

Bitcoin mining is the process of processing Bitcoin transactions, adding new blocks to the blockchain, and creating new units of Bitcoin.

During mining, computational power – also known as hash power – is utilized via specialized mining hardware to solve complex calculations. Bitcoin miners contribute immense amounts of processing power to find the next block, competing against each other for the block reward. Bitcoin transaction blocks are rewarded with 6.26 BTC for the first miner to verify them. By 2024, the reward will be reduced to 3.125 BTC through a process known as block reward halving. Every four years, the process of halving takes place.

This section is going to give you some information on some of the best cryptos to mine at home, so you can earn a profit

How to Start Crypto Mining at Home

Bitcoin mining from home may still be possible, but it has taken on new forms. To be able to mine Bitcoin at home today for a profit, you need to be able to compete with owners of warehouses full of ASICs that move around the country or region depending on the price of energy. It is possible to do this in two ways: either by mining pools or by mining altcoins in exchange for bitcoins. 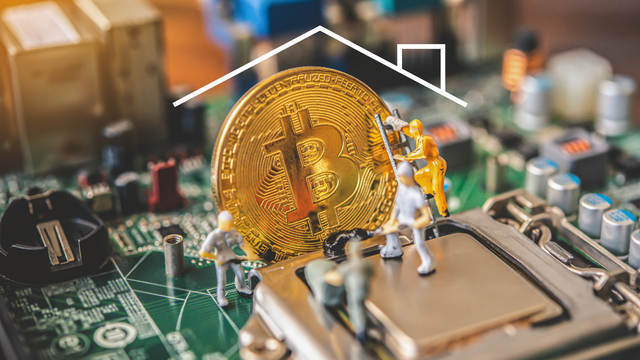 Consequently, you might accumulate wealth more slowly, but you might also win those BTCs that you would have lost without computational power.

In all, however, Bitcoin mining at home is not very profitable, even in a mining pool. Despite having a market share of 15.8%, AntPool’s top earners only earn $10.06 per day.

You may be able to mine altcoins (cryptocurrencies other than Bitcoin) in exchange for Bitcoin rewards on some mining pools. Miners can, for example, mine ETC, ERGO, and Raven in exchange for BTC rewards when using the Bitcoin Payout Feature of mining pools such as 2Miners.

Miners simply switch their payout wallet from the crypto in question to a BTC wallet to complete the process.

When it comes to Bitcoin mining, the answer is yes, since various jurisdictions accept it. For example, Enigma (located in Iceland) has established one of the largest Bitcoin mining operations in the world.

Is Bitcoin mining worth it?

Invest the necessary capital in hardware first and determine the future value of Bitcoin and difficulty level before committing resources. For the mining operation to be profitable, you must also examine the difficulty of the cryptocurrency you wish to mine.

Bitcoin mining at home is no longer as lucrative as it once was. Energy costs are soaring as a result of increased energy demands, an energy crisis caused by war, and a general lack of resources. With the current bear market, the investment doesn’t seem worth it. Bitcoin mining, however, could be a good investment for those who believe Bitcoin will continue to rise in the near future. Thanks for taking the time to read my guide on how to mine bitcoin at home.