Lensa AI, a photo editing software, went viral over the past few days after adding a new avatar-generating tool based on stable diffusion. You are not the only person whose Instagram feed is filled with images of their pals created by an algorithm. Users shared their uncanny AI-crafted avatars in stories and posts after the program’s latest update.

Lensa was Stable Diffusion’s first attempt at making a very popular software, but it won’t be the company’s last. Nothing stops people from using it to make nude pictures of children or women without permission based on their social media pictures. It might look like a fun and innocent thing to do, but it can be used to do either of those things. Caliskan says that the spread of negative stereotypes and biases in society is bad for how women and girls see themselves and how other people see them.

What is Artificial Intelligence

How Does Lensa AI App Work?

The Lensa AI app functions quite differently than typical photo editors, which apply adjustments and output photographs in real-time. When you use the Lensa AI app to submit your selfies, those images are sent to the cloud servers of either Amazon or Google. After that, the artificial intelligence analyses your selfies by employing a latent diffusion model and CLIP, a dataset containing more than 400 million images and generating photos in various alterations and artistic styles.

Since an enormous amount of computational power is required to operate the Stable Diffusion model on the cloud, the generation of AI images for Lensa AI takes a significantly longer period of time than it would otherwise.

How to produce AI photos with the Lensa app?

Now that you know it’s paid if you are ready to cash out, you can create your own AI avatars in a matter of minutes by following the steps provided below.

Now, the app will develop AI photographs of you in 15 to 20 minutes. 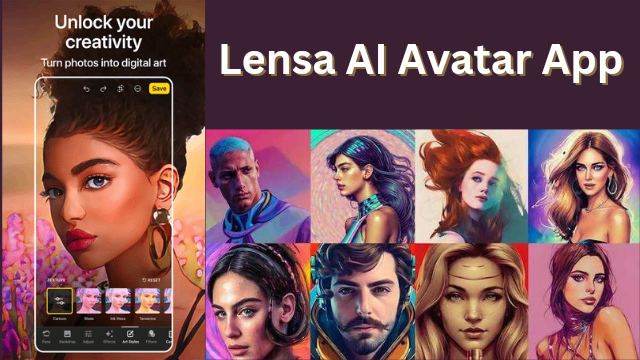 Is Lensa AI Privacy Safe to Use the Lensa AI App?

To make a great avatar, you must send at least 10 to 20 selfies. When you upload pictures from your camera roll to an app, you should always consider how that might affect your privacy. Prisma Labs, which is based in Sunnyvale, California, in the United States, is the company that made the Lensa AI software. The company says that once avatars have been made, all photos that have been uploaded are taken off the system.

Aside from that, its Privacy Policy says that it uses servers from companies in the United States, like Google Cloud Platform and Amazon Web Services, to upload images. The photos are encrypted while they are being sent, which should put your mind at ease about their safety.

In case you were unaware, most social media websites and applications, such as Instagram and Facebook, have content restrictions that are very similar to one another. That being said, there is that. Ultimately, deciding to utilise the app is entirely up to you and your preferences.

How Much does it Cost?

The feature requires payment to access. This is due to the fact that the application uses “tremendous computer power” to generate one-of-a-kind pictures each time and simultaneously puts its AI system through its paces. When users want to make their own magic avatars or AI images, they have their choice of three different packs from which to choose.

This bundle will produce 5 distinct variations each comprised of 10 different styles.

This pack will produce 10 distinct variations of each of the 10 styles. According to Lensa, it is the pack that has the most buyers.

This pack will produce 20 different permutations of 10 different styles.

This pack will produce 20 different permutations of 10 different styles.

Users are given the opportunity to test out the functionality in three of these packs. You will, however, receive a discount of 52% on Magic avatars if you purchase a yearly subscription to Lensa, which is presently offered at a price reduction of Rs 2,499 and is currently available for purchase.

The information presented here should be sufficient to answer any questions regarding the Lensa AI app. However, applications such as these also demand that we give some thought to the future that AI will dominate. In addition, please use the comment box below to ask any questions you might have.

Thank You For Visit CyberLearning